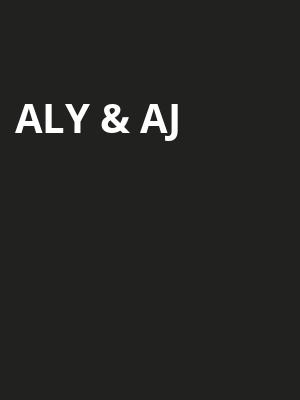 Forget everything you thought you knew about Aly & AJ. Okay, well, maybe not everything. Keep the sense of nostalgia and the knowledge that the duo can create a kick-ass pop song. Now you're ready for their next chapter, an impressive and advanced evolut

Sister duo Aly & AJ first began making music in 2005, off the back of their Disney channel reign. The pop-rockers and former Disney stars who have recently emerged from a 13-year hiatus, with 2017's EP Ten Years showcasing a new sound. 2023 will see the duo head out on the road once more, bringing their new sound to you.

15 years after their perfect pop debut 'Into The Rush' which was certified gold and reached the number 36 spot on US Billboard 200, Aly & AJ are officially back. Following the release of their first comeback project, 'Ten Years', a four track EP, in December 2019, they continue to shed their Disney skin with the brand new record, A Touch of the Beat Gets You Up on Your Feet Gets You Out and Then Into the Sun.

Sound good to you? Share this page on social media and let your friends know about Aly & AJ at House of Blues.