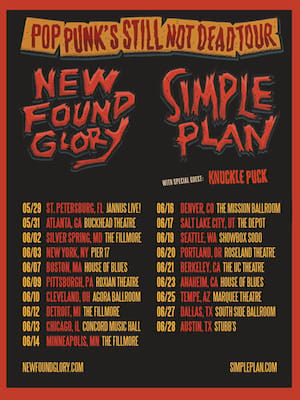 As soon as New Found Glory took the stage, there was a palpable shift throughout the entire venue. Everyone in attendance became more excitable, more vibrant, more alive.

Two giants of the 90s and 00s pop-punk scene have announced a co-headline tour this summer, as New Found Glory and Simple Plan join forces for the Pop Punk's Still Not Dead Tour. Shooting to worldwide fame in the noughties as part of an international movement which produced bands like Sum 41, Green Day and Blink 182, the two stalwart acts will tear across North America together from May 29th - June 28th.

Originating in Canada, Simple Plan have racked up a huge catalog of catchy pop-punk moments, with a hint of emo thrown in for good measure. Formed in 1999 and led by vocalist Pierre Bouvier, three of their five studio albums are certified platinum, with a worldwide touring record that includes no less than 10 Warped Tours and shows with Good Charlotte, Green Day and Avril Lavigne.

New Found Glory hail from Coral Springs, Florida, and were formed in mid-1997 by vocalist Jordan Pundik, bassist Ian Grushka, drummer Joe Moreno and guitarists Chad Gilbert and Steve Klein. Regularly credited as one of the godfathers of the genre, the band have released 9 studio albums, with the tenth due for release on the opening day of the Pop Punk's Still Not Dead tour.

Sound good to you? Share this page on social media and let your friends know about New Found Glory and Simple Plan at Agora Theater.