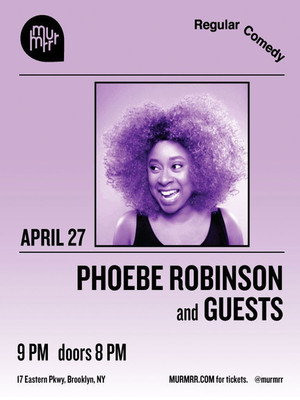 PHOEBE ROBINSON is a stand-up comedian, New York Times best-selling writer, and actress whom Bust, Time Out NY, Vulture.com, Brooklyn Magazine, Essence, San Fransisco Sketchfest, O Magazine, and Buzzfeed.com have all praised and named one of the top come

Get up Close to One of America's Most Exciting Rising Comedians

Phoebe Robinson is more than simply a comedian. She is also a writer and an actress who has become popular for her blunt and direct way of storytelling. Robinson is perhaps best known for her podcast '2 Dope Queens,' which she co-hosts with fellow actress and comedian Jessica Williams. This year, the comic will head on tour, bringing her inspiring comedy to audiences across the country.

Telling jokes and running a podcast isn't all Robinson has up her sleeve. The actress has starred in Amazon's 'I Love Dick,' Comedy Central's 'Broad City' and Refinery29's 'Woke Bae.' In 2016, she released her book 'You Can't Touch My Hair and Other Things I Still Have to Explain' which went on to become a New York Times best seller.

Sound good to you? Share this page on social media and let your friends know about Phoebe Robinson at Hilarities Cleveland.