Norm Macdonald is also touring to: 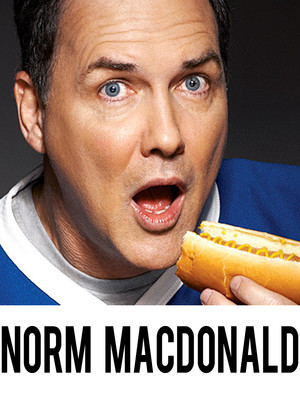 Norm MacDonald is coming to town!

During his tenure on SNL, Canadian stand-up and writer Norm Macdonald could always be guaranteed to draw gasps of astonishment from the audience. MacDonald always pushed the boundaries of what could be said on network tv during his Weekend Update segment, with his conversational one-liners about current events and celebrities. In 1997, he took his sardonic dead-pan delivery to the White House, in what is now considered one of the great Correspondent's Dinner's appearances.

Since then, he's made regular appearances on the big screen, including the cult classics Screwed and Dirty Work, and helmed his own self-titled show on ABC, which ran for three seasons. Norm can now boast of having his own show on Netflix, joining a whole host of other comedy greats!

His acts have to be seen to be believed and can have you laughing from start to finish. His stand-up is a true gift, and no two shows will ever be identical! Make sure you don't miss this comedic genius when he comes to a city near you.

I was front row and was riveted from beginning to end. Even the opener... more

Jorge: “Worth the trip”

We drove 3 hours to see the show. It was worth it. Norm is insightful.... more

Sound good to you? Share this page on social media and let your friends know about Norm Macdonald at Masonic Auditorium.