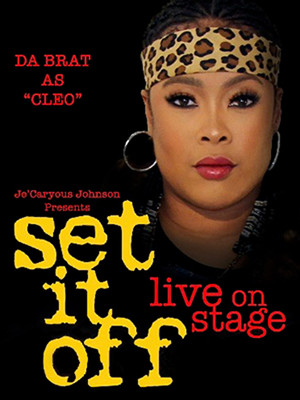 Je'Caryous Johnson's Set It Off

Without a doubt, this will be one of the greatest stage plays ever seen in the urban theatre market. From the type of action and to the movement on stage, it will be nothing short of jaw dropping.

Why See Je'Caryous Johnson's Set It Off?

The only breaks you get are the ones you take

The iconic black culture phenomenon gets a thrilling new stage adaptation courtesy of legendary producer and director Je'Caryous Johnson. Don't miss this action-packed production about four lifelong friends who head out to Los Angeles to pull off the heist of a life time.

Released in 1996, Set It Off was an instant chart-topping success alongside its platinum-selling soundtrack. Now you can re-live the urban movie live as it tours across the country this year in the super-capable hands of Johnson and all-star cast. With over 20 stage plays to his name and an incredible four-decade career, we guarantee this is going to be a theatrical highlight!

Sherry B.: “They Set It Off at the Orpheum!”

McKenzie: “Set It Off”

Sound good to you? Share this page on social media and let your friends know about Je'Caryous Johnson's Set It Off at Connor Palace Theater.