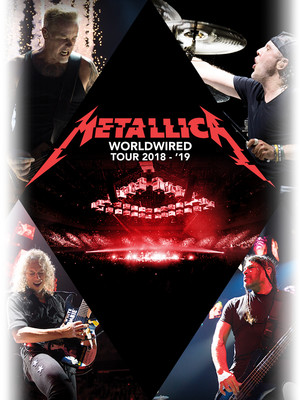 Hetfield and Ulrich's metal icons return for their WorldWired tour!

Metal monsters Metallica are returning with a vengeance this year for their WorldWired tour! They'll be touring tracks from their 2016 album, Hardwired... to Self-Destruct, which was the band's first solo studio album since 2008's Death Magnetic. It also followed their 2011 collaborative record with Lou Reed Lulu, which was... divisive to say the least.

Formed in 1981 by James Hetfield and Lars Ulrich, Metallica have been stalwarts of the American metal scene ever since, breaking through into the mainstream with the double whammy of ...And Justice For All (1988) and their self-titled eponymous fifth album (1991). Among their many metal classics are 'Enter Sandman', 'Nothing Else Matters', 'Master of Puppets' and 'For Whom the Bell Tolls'. Catch them play all the hits (and possibly some new material) when they bring this titan tour to town

Metalhead 4 Ever: “Metallica alive and well”

This was the best stadium cocert I ever saw! Metallica's music has gotten... more

Sound good to you? Share this page on social media and let your friends know about Metallica at Quicken Loans Arena.